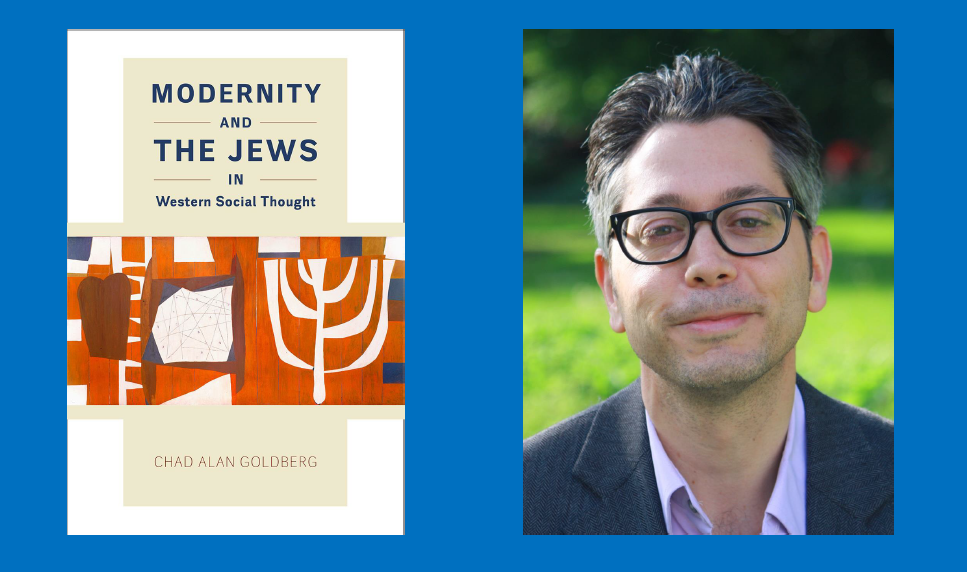 What place are minority groups accorded within sociological theory and what insights could be gained by historically analyzing the representation of Jews in Western European theoretical reflections on the conditions of modernity? These are some of the questions that Dr. Chad Alan Goldberg addresses in his recently published book, Modernity and the Jews in Western Social Thought (2017).

Dr. Goldberg is a professor of sociology affiliated with the Center for German and European Studies, the George L. Mosse/Laurence A. Weinstein Center for Jewish Studies, and the George L. Mosse Program in History at the University of Wisconsin–Madison. He is also a proud alumnus of the CUNY Graduate Center’s Advanced Research Collaborative, where he was previously a Distinguished Visiting Fellow while developing his most recent publication. On September 7th, 2017, the Graduate Center’s Advanced Research Collaborative and Sociology Department welcomed Dr. Goldberg to launch his new book.

Dr. Goldberg argues that in the 19th and 20th centuries Jews emerged as a touchstone for defining modernity in the work of influential social theorists of France, Germany and the United States: Emile Durkheim, Karl Marx, Max Weber, and Thomas Park, amongst others. That is, each of these authors, working within distinct national traditions, would take a synecdoche of modernity—one aspect that represents the whole—and analyze the extent to which Jews embodied or embraced each of these aspects.

For example, taking urbanization as an index of modernity in the United States, Thomas Park examined patterns of and tensions around Jewish immigrants’ experiences in the burgeoning urban metropole of New York City. During the era of the French Revolution, Emile Durkheim attempted to challenge anti-Semitic depictions of Jews as either agents of revolutionary subversion or counter-revolutionary reactionaries, situating Jews as either premodern or anti-modern. In the German context, Karl Marx and Max Weber reproduced cultural assumptions about Jews from Christian theology, situating them as “backwards,” but in secularized terms. As such, Dr. Goldberg asserts, Jews played a significant role as intermediaries for European self-reflection at a time of major social, political and economic transformations.

The methodological approach of Dr. Goldberg’s project draws on Pierre Bourdieu’s notion of “reflexive history,” which “takes itself as its own object” (quoting Bourdieu). Specifically, Dr. Goldberg seeks to historicize the emergence of oppositional categories, i.e. Jewish vs. not Jewish, that shape our understandings of modernity. By doing so, he seeks to denaturalize such dualisms and the social out-groups they construct, which continue to shape the meaning of modernity today.

In introducing the book, Dr. Goldberg recounted how the idea for the manuscript originated at an international conference on anti-Semitism and the emergence of sociological theory at the University of Manchester and then expanded n into a longer-term project. His book promises to hold valuable insights for scholars in Jewish studies and the history of European and American thought. More broadly, however, it is equally helpful for scholars thinking about the politics of the representation of social minorities, processes of “Othering,” and theories of European and capitalist modernity. It would be interesting to see how Dr. Goldberg’s analysis of the Jews as an object of study within modern social theory could also be understood in relation to shifting racial formations and discourses of whiteness within and across the contexts of France, Germany and the United States.