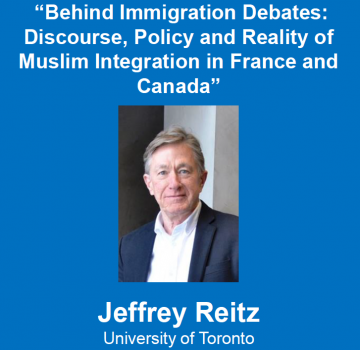 What impact does public discourse about immigration have on the lives and experiences of immigrants? The expected answer to this question would be that a generally positive public discourse should have a positive overall consequence for immigrants. As Prof. Reitz demonstrates, however, there are a number of ways to problematize this expectation. On one hand, the positivity of public discourse is shaped by factors such as geography. On the other hand, variation in immigrant experience does not line up neatly with the benevolence of public discourse.

Prof. Reitz examines these varying effects by examining discourse and immigrant experience in France and Canada, with Quebec providing a third case, that fits somewhere between the other two. He probes the expected answer through a broad sweep of measures, from likelihood of reporting discrimination, to labor force participation. Overall, once the differences in immigrant demographics are taken into account, public discourse does not appear to decisively shape experience. Other factors, such as generational effects, exert more consistent influences across cases.

Of particular interest (at least to me) is Prof. Reitz’s close attention to the content of public discourse. While Canadian discourse might be generally characterized as very positive, with French discourse appearing far more negative – or at least, negating – about immigration, there is far more to the respective conceptions of immigration than just a positive/negative divide. Prof. Reitz sketches out the profile of the typical (according to public discourse) immigrant each country – the educated South Asian immigrant to Canada contrasting to the uneducated, poor North African immigrant to France – and notes the importance of history, geography, and other large, structuring factors in shaping these images. He also notes the shift after 9/11, with various immigrant identities suddenly congealing into a stark Muslim/non-Muslim divide.

As is so often the difficulty in social science, some of Prof. Reitz’s theorized mechanisms left me wondering about alternative explanations. In using reported discrimination as a measure of immigrant experience, is the discrimination, or the willingness and ability to report this more important? And if each of these might have a different effect, what overall effect can they be expected to have when bundled together into one variable? Should we even expect any one, overall effect?