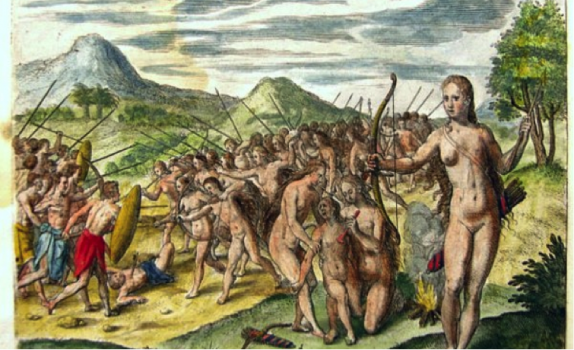 “Women’s studies are not just about women—but about the social systems and ideological schemata which sustain the domination of men over women within the other mutually inflecting regimes of power in the world, namely those of class and those of race.”

Challenging the dominant patriarchal narrative of the Spanish conquest in Latin America, Dr. Patricia Tovar’s project incorporates the history of women as wives, landowners, businesswomen, servants, warriors, foes and friends. Focusing in part on the geographic area of Santa Maria, a colonial settlement in present-day Columbia that lasted fifteen years, Tovar’s project recounts the conquest through the lens of Spanish, indigenous and enslaved women, joining several contemporary scholars (such as art historian David Lubin) who defy the conventional domestic or promiscuous portrayal of women in the early modern period.

On Thursday, Tovar introduced her talk by debunking common myths about the early conquest, including the one recounting that prostitutes, servants and indigenous women were the only women present in the New World. Tovar provided countless examples of women holding diverse positions in the Americas. One of the most striking stories is of Isabel de Barreto, a Spanish woman who led an expedition from Peru to the Philippines after her husband, the ship’s captain, died en route. Another one is Columbus’ official request for thirty women to travel on his fourth voyage to the Americas.

Deeply interested in cross-Atlantic relations and kinship, Tovar argues for women’s vital role in the settlement of the New World and their part in maintaining strong ties with ruling women of Spain. In fact, Bobadilla women in the New World were very close to Isabel de Castilla and are found in Latin American until today. While some Spanish women who traveled to the New World are romanticized in novels (one of the only currently available published texts about them), Tovar’s study brings to the fore primary documents—including contracts, passenger lists, travel documents, death registrations, requests to the crown, maps, chronicles of expeditions—that she consulted at the Casa de Contratación in Madrid. These reveal accounts about infidelity, adultery, and requests for funds. 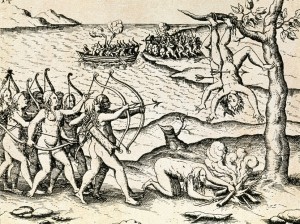 Within the feminist sphere, Tovar is also concerned with marginalized groups of women, including indentured and African slaves, and indigenous peoples. She described the caciques, women warriors who killed men, and fables of islands populated only by women. This multicultural focus adds a layer of complexity to her project; in fact, since Tovar is relying primarily on accounts by Spanish women, how will she draw an objective analysis of these further marginalized groups? During her talk, Tovar discussed the problematic sources, as they clearly reflect the women’s personal ambitions and relate conflicting stories. Some documents do shed light on this problem, such as one that discussed Spanish men being brought to justice for rapping enslaved women. 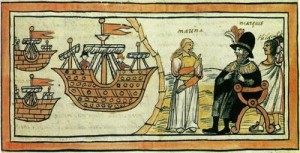 Throughout her talk, Tovar posed some guiding questions: How was gender and family organized during the conquest? How was femininity constructed in the New World? What were the relationships between marginal and dominant women in this contested space and at this time? It will indeed be very interesting to read Tovar’s socio-biographical narrative of these cross-cultural relationships.