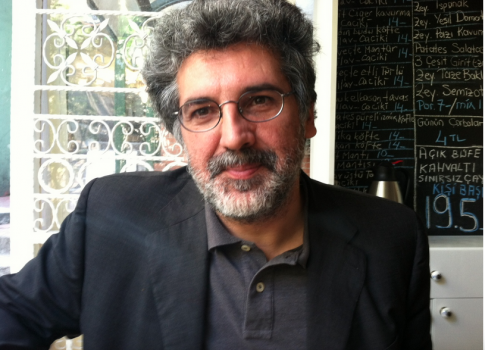 “Democracy is an Illusion,” read the slide that opened Dr. Tomba’s presentation for the ARC research seminar. The slide pictured a crowd of protestors assembled in 2011 in Brussels who were, Dr. Tomba argued, part of a series of global uprisings against the manner in which democracy is being practiced today. Respected news sources around the world have published articles with similar conclusions over the past five years, declaring: “Democracy is rubbish,” or, “Democracy is in recession.” There is, it seems, a common sentiment around the world of dissatisfaction with democracy. In his presentation, Dr. Tomba examined the cause of this dissatisfaction and two oft-proposed solutions before advancing a third, alternative possibility.

Rising popular discontent suggests that the current acceleration of democratic processes is not sustainable. There are therefore two options commonly advanced by scholars to reclaim democracy, both of which involve a resynchronization of democracy and capitalism. These are: (1) Effectively accelerate democracy to the pace of the market, or (2) Create a slower democracy to enable true participation (and a find means to decelerate capitalism).

Using popular movements such as Occupy and Arab Spring as examples, Dr. Tomba broke from these typical arguments to envision the creation of a third possibility outside of the common framework that represents both a different political experience and a different temporality. He argued that this new temporality, a temporality of anticipation, “expresses itself not in new constitutional architectures, but in architectures that have to be realized in the experiential dimension of practice.” Simply, the temporality of anticipation involves: (1) social and political change through self-change, and (2) change by creating new forms of being together in relationship.

Dr. Tomba argued that this is a fundamentally different type of political praxis, focused on solely the means rather than on justifying the means by the ends. Indeed, in addition to highly publicized movements such as Occupy and Arab Spring, this temporality of anticipation is also expressed in many locally-based movements, with local foods, transition towns, ecovillages, and alternative currencies all being examples. These movements create alternatives to the current political and global economic systems through the work of connected individuals using their own agency to affect change in their daily lives. These social movements choose the alternative, rather than the oppositional, path to change.

Whether this approach, this temporality of anticipation, can truly create sustainable social, political, economic, and environmental change, however, remains an open question. Does the temporality of anticipation truly open up new ways of being and doing that are capable of changing global systems? Or do we need the traditional “slow slog” through democracy to truly affect change? This is a conversation that needs to remain active as we continue to evaluate our current systems of democracy and capitalism in order to consider how to build more sustainable societies.