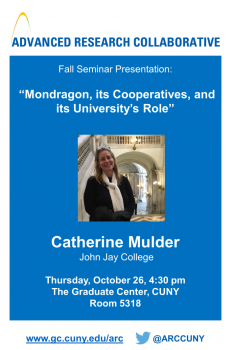 An Alternative to Capitalist University: The case of Mondragon University

Professor Mulder claimed that most academic programs assume capitalist structure and they do not regard anything to its alternatives. Since workers are the ones who know their job the best and who run the companies, it is best for the companies and institutions to rely on its workforce to make various decisions. Therefore, one of the alternatives to a capitalist system, she believes, is cooperatives which are broadly classified into three types: consumer, producer and worker cooperatives.

By invoking, Yanis Varoufakis, she claimed that capitalism might be undermining itself! Due to technological innovation and other things, capitalism is becoming obsolete. Will the world fall apart if capitalism stops now? she asked. Probably not, we will have a different system and maybe we could have more time for fishing and voting? She introduced Mondragon worker cooperatives as an alternative the current system.

Mondragon is located at Basque Region of northern Spain.  Mondragon companies are worker cooperatives where workers make rules and regulations. First Mondragon firms were opened in 1956. There are now about 260 firms and 15 technological centers, which employs over 80 thousand people. While Mondragon companies are subject to market forces and business cycle, they have faced very little bankruptcy case. It is primarily because they value workers over capital and planned market over the free market. In the areas where there were Mondragon companies there was very little unemployment because, if workers were laid off, they were absorbed in another company or given retirement benefits. She summarizes her critique of capitalism: what is the difference between a government ruling top-down and private companies doing the same?

While Mondragon companies are all over the world, her main focus was on Mondragon University. It is a knowledge sector of the companies. It has bachelor`s, masters and Ph.D. with various subjects from mechanical engineering to culinary arts. All stake-holders administer the university including faculty, staff, and students. They apply Mendeberri Learning Model whose components are training students to work cooperatively in teams, to learn how to direct projects, how to make decisions, how to negotiate and communicate. In this model, students have the central role.

In classrooms, in all subjects, they do not just assume capitalist models, but they learn about strategic management, market forces and how to be cooperative. The objectives of the university are: Broad social access to knowledge about the company and the global economy, developing interpersonal as well as critical and quantitative analytics, and the art of communication, team decision making (how to come up with mutually beneficial projects) and democratic principles (which is the whole idea: economic justice.).

At Mondragon, they elect their general manager. They elect a board of directors and then those people pick a governor body that does the daily stuff. Everything is done in a democratic manner and with a focus on its employees and the sustainability of labor. Major roadblock on forming such cooperatives is the lack of funding. To overcome that, Mondragon has its own bank which itself is a cooperative. While the ratio of average worker to CEO often ranges from $300-700 to $1 in several western companies, at Mondragon, it can only be maximum of 7 to 1.

Following her remarks, one can raise some questions: Where does the money come from? Does it not follow the same capitalist system to generate its money? If so, then how is it different among other from the current capitalist model? Why does a Mondragon company abroad have low paid workers who are not members of the cooperative while workers in Mondragon are the members of the cooperative?