On September 22, 2015, the Advanced Research Collaborative sponsored a panel discussion on the mortality analysis, socio-political implications, and Western response to the Ebola crisis in West Africa. 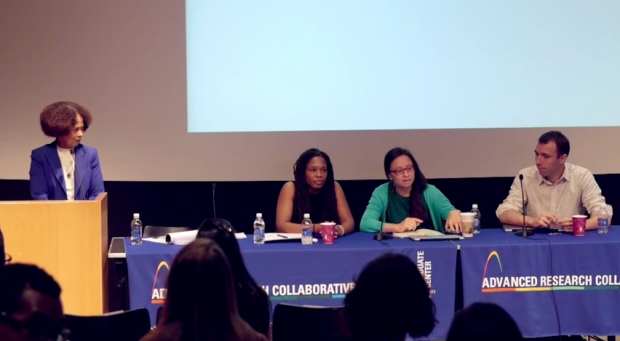 On September 22, 2015, the Advanced Research Collaborative sponsored a panel discussion on the mortality analysis, socio-political implications, and Western response to the Ebola crisis in West Africa.

Leith Mullings (moderator) – The Graduate Center
Leith Mullings is Distinguished Professor of Anthropology and immediate past president of the American Anthropological Association. Her research began in Africa on traditional medicine and religion in postcolonial Ghana, and her work in the U.S. addresses the consequences of class exploitation, racial discrimination, and gender subordination for the health and well-being of working- and middle-class women in Harlem.

Kim Yi Dionne – Smith College
Kim Yi Dionne is an assistant professor of Government who teaches courses on African politics and ethnic politics. The substantive focus of her work is on the opinions of ordinary Africans toward interventions aimed at improving their condition and the relative success of such interventions. Her work has been published in African Affairs, Comparative Political Studies, and World Development.

Stéphane Helleringer – Columbia University
Stéphane Helleringer is an assistant professor of Public Health who has worked extensively in Senegal, Ghana, Nigeria, and Malawi. Most recently, his work has focused on developing new approaches to evaluating the impact of large public health programs on mortality in sub-Saharan countries.